Clearing Up the Hype Behind 3D Printing

Dubbed ‘Manufacturing 2.0’ and a prominent member of the Fourth Industrial Revolution (4IR) club, 3D printing has exploded onto the scene ever since the patents for two of its key technologies expired at the end of the 2000s, ushering in a score of service suppliers and printer manufacturers in the marketplace. Simply search “3d prints” online and you’ll be amazed by the complexity and variety of products coming out of 3D printers, from prosthetic limbs to footwear to titanium fuel nozzles used in aircraft engines. 3D printing, or additive manufacturing (AM), enables the creation of products that are otherwise too costly, too inefficient or simply impossible to realize with traditional manufacturing methods. But despite its transformative impact on the manufacturing landscape, there is a lot of hype surrounding 3D printing.

And where there is a lot hype, misinformation usually follows.

In my conversations with people in and outside the 3d printing community, the most glaring misconception I had uncovered was that 3D printers were going to be as ubiquitous as office or home printers; that they will eventually replace traditional manufacturing equipment just like personal computers have replaced typewriters. The reality is, on the consumer side, 3D printers are largely reserved for hobbyists and therefore have not realized the kind of penetration rates we’ve seen with document printers, for example, despite that global demand for consumer 3D printers grew by 27% in 2016, according to U.K market-research firm CONTEXT. For the traditional manufacturer, 3D printing serves primarily as a complementary, not substitutive, process.

In righting these misconceptions, you may be asking why — why are hobbyists the prime users of desktop 3D printers? And why has the industrial 3D printer been relegated to the role of sidekick alongside conventional equipment in most manufacturing settings that employ them?

I’ve attempted to answer these questions by elaborating briefly on five areas of 3D printing.

The learning curve for becoming a practitioner of 3D printing, be it at home or in a business setting, is steep and takes on several dimensions.

When compared to injection molding, 3D printing using Fused Deposit Modeling (FDM) technology — which deposits or extrudes melted plastic in consecutive layers to build the model — yields parts that are structurally weaker. The former, a conventional manufacturing process, makes parts with evenly distributed strength, whereas with 3D printing, because of its layer-by-layer process, the bonding of the layers is weaker than the extruded material itself. Another way to look at this: take a Lego brick and snap it squarely onto another of the same size and shape. The block, representing the layer, can be easily removed – the point of weakness. But the block itself will be much harder to break apart. 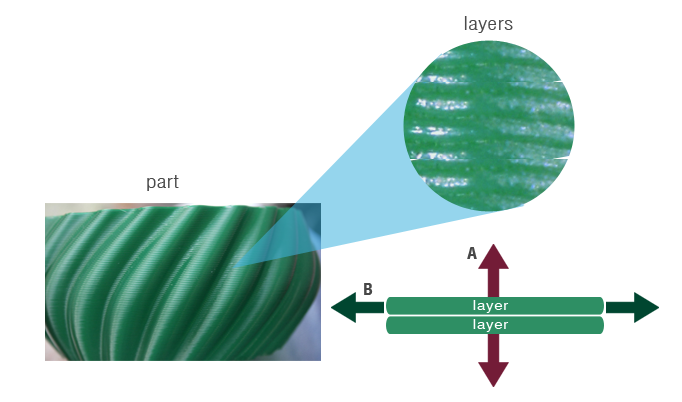 Figure B. It would easier to break apart the layers (A) than it would be to break apart an individual one (B).
In other words, the chemical bonding between the layers is not as strong as the single extruded layer.

The surface finish of 3d prints vary, depending on the process, resolution, material and any post-processing work done to the part. Most people outside the 3D printing community will associate plastic with being smooth with a glossy finish, which is not always the case. When 3D printing with FDM technology, for example, the part will have a rough texture with visible “layer lines” on it (see photo below). Other 3D printing technologies like SLA, which converts liquid materials into solid parts, yield smoother surfaces, requiring less post-processing work.

Figure C. This unprocessed model of a pug was printed with Fused Deposit Modeling (FDM) which, together used with ABS or PLA materials, yields parts with the roughest surface texture of all 3D printing technologies.

The bigger or denser your part, the more expensive it’ll be to print in 3D. The type of material also influences the cost. A high-performance engineered plastic able withstand extreme heat, for example, is pricier than a commonly used plastic like ABS, the material found in a Lego brick. In addition, your at-home 3D printer will not achieve the economies of scale found in mass-manufacturing operations. Plastic material for a 3D printer costs about 84 cents per cubic inch, which is significantly more, by the same unit of measure, than the cost of a finished product coming out of a factory that buys the material in bulk at a lower cost per cubic inch, passing some of its savings onto consumers. To that end, it’ll be cheaper for you to buy a casing for your phone than it will be to print it yourself. However, printing small, intricately shaped objects (one of the great benefits of 3D printing is the boundless freedom you have in designing your part) that are not available on the market would definitely be worth the cost, assuming you will have a practical use for it, fulfills your artistic endeavours, or meets you or your client’s prototyping objectives.

Economies of scale achieved only with conventional manufacturing

Figure D. Save money by buying commonly available products as opposed to printing them at home. 3D printing works best with small parts with intricate geometries that are unique and not readily available on the market for purchase.

Printing speed — the time it takes to process a digitized 3D model into a physical object — is not as fast as most people think. It can take hours, even days, to print in 3D with FDM, the technology behind most consumer-grade 3D printers. Speed is influenced by the speed settings of the printer along with the size, material density and quality of the part. Increasing layer thickness will speed things up, but at the expense of quality, namely the resolution on the Z plane (vertical) of the part. If you’re asking if printer speed will increase in the future, I don’t see it happening anytime soon with common consumer materials like ABS or PLA, which face a speed threshold when extruded (the depositing of the melted plastic to form the layer).

Steer clear of the hype as 3D printing evolves

As the 3D printing continues to evolve and churn out case studies for the media (remember the 3d printed gun? Or, more recently, the 3d printed bionic arm given to a seven-year-old boy by actor Robert Downey Jr.?), it’s important that we be aware of its capabilities and limitations and make realistic projections of its impact on both society and the business community so as to avoid being misguided by the hype that normally comes high-profile emerging technologies. Luckily, thanks to the Third Industrial Revolution — the age of the internet — we have more than enough information to help us accomplish that.